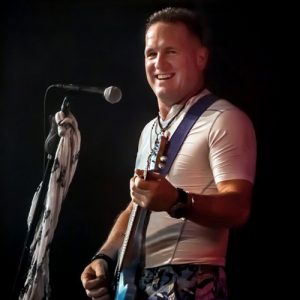 Walt began playing guitar at the age of 14. After several years of trying to convince his parents he was serious about learning to play, they finally agreed to match any funds he could save on his own so he could buy a cheap Les Paul copy. Luckily, he got a job painting fences during the summer and saved enough to get the guitar he had his eye on. His life was changed forever after hearing Michael Schenker of UFO.  His tone, phrasing, and melodic style had a huge impact. Soon after, Eddie Van Halen, Gary Richrath, and Roni Le Tekro became his main influences. Not patient enough to take lessons, he soon learned that he had an ear for figuring out how to play what he was hearing from his favorite guitarists. “Being in Arsenal is a dream-come-true for me. I’m lucky enough to be in a band with guys that I’m great friends with, and it just keeps getting better and better! We have more fun than I could ever imagine having doing something that is a lifelong passion.”