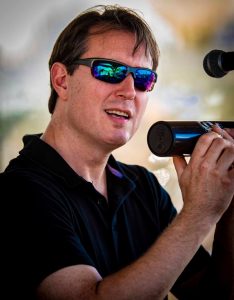 Classically trained percussionist and accomplished keyboardist, Evan plays vibes, drums and also guitar. His Roland D-50 faithfully captures the Classic Rock era sounds Arsenal audiences know and love. Growing up, Evan listened to music his Dad played, from Pink Floyd to Lionel Hampton and is inspired by the music of Oscar Peterson, and would like to collaborate with Herbie Hancock someday.

With a BS in Music Education, Evan has played with the Bay Atlantic Symphony, Road Scholars, Main Stage Big Band and with dozens of other bands.

“Arsenal is my musical dream time, it just doesn’t get any better than that. Def Leppard’s Armageddon It and Let’s Get Rocked, which are my favorite tunes to play live. It’s fun music with a groove that gets the audience on their feet.”